Activists interrupt TB conference opening ceremony to call on J&J to cut price of TB drug in half, to one dollar per day

The Hague — Activists interrupted the opening ceremony of the 49th Union World Conference on Lung Health in The Hague today, to call on US pharmaceutical corporation Johnson & Johnson (J&J) to cut the price of the TB drug bedaquiline in half, to ‘one dollar per day’, so that people who urgently need it can afford it.

The World Health Organization (WHO) recently recommended expanding the use of the newer oral drug bedaquiline (produced by J&J), making it a core drug for treatment of drug-resistant tuberculosis (DR-TB), while relegating to last resort those TB drugs that need to be injected and cause horrible side effects. These new treatment guidelines more than double the number of people with DR-TB for whom bedaquiline treatment is recommended. Governments must act fast to expand access to bedaquiline as a core component of safer, more effective, injection-free treatment regimens.

J&J recently reduced the price of bedaquiline to US$67 per person per month (US$400 per six-month course). However, this price falls short of making the drug affordable in countries that are hardest hit by DR-TB, especially given that bedaquiline is just one of up to seven medicines that are necessary to compose a treatment regimen for DR-TB, and considering many people will need to take bedaquiline for longer than six months. 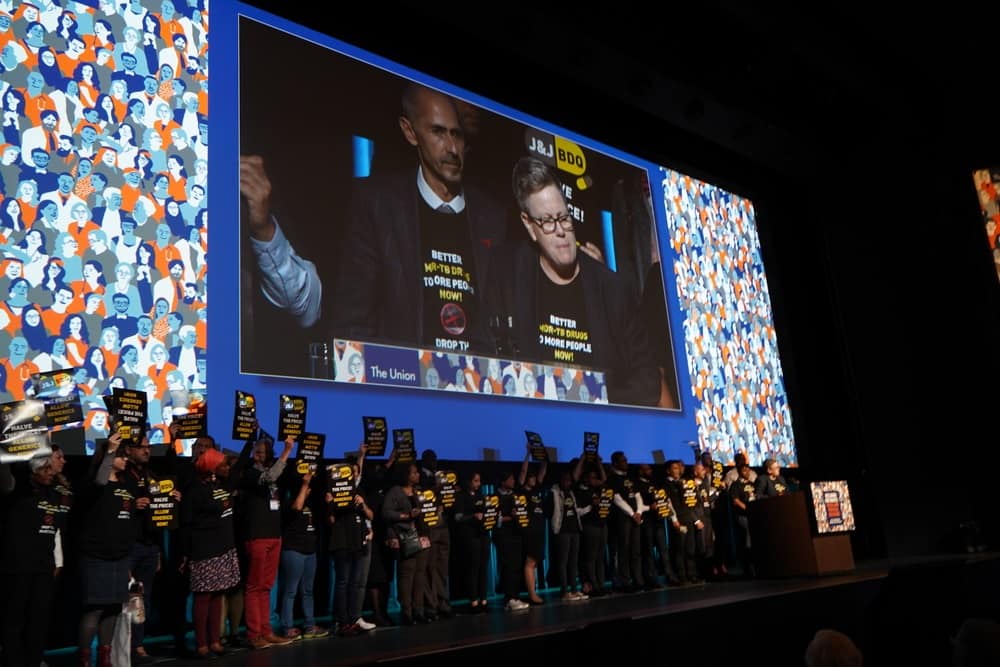 At $67 per month, bedaquiline is more than double the price of linezolid ($29–42 per month) and up to 22 times the price of levofloxacin or moxifloxacin ($3–9 per month), the two other medicines the latest WHO treatment guidelines recommend for the backbone of DR-TB treatment regimens. However, researchers from the University of Liverpool have calculated that bedaquiline could be produced and sold at a profit for $16 per month at volumes of 108,000 treatment courses per year.

Activists today demanded that J&J cut the price of bedaquiline in half, to no higher than $1 per day — $32 per person per month — double the price that researchers estimate bedaquiline could be sold for a profit. Doubling the price is intended to account for current low volumes — only 25% of the 558,000 people estimated to have developed MDR-TB in 2017 were started on treatment, and most did not receive bedaquiline. To date, only 25,000 people have received bedaquiline worldwide.

Groups pointed to the significant taxpayer money that J&J has received for the development and introduction of bedaquiline, and the need for these public investments to be reflected in the price of the drug.

“J&J benefited from substantial public investments for the development and introduction of bedaquiline. The price should reflect the public’s investment. It’s unacceptable to ask us to pay twice, or three times if you consider the tax avoidance schemes companies like J&J use to deprive governments of tax revenues.”

“J&J is not doing us a favour. Without the markets, they secure no profits! We need beqaquiline because the African region is home to most of the High Burden Countries. We are willing to pay, but only at an affordable and fair price.”

“J&J’s exorbitant prices mean bedaquiline — a key drug in the fight against DR-TB — is unaffordable in countries where it is needed most. At the same time, Oxfam’s research shows that J&J appears to be depriving poor countries of millions of dollars in unpaid taxes each year — money that could be used to pay for the clinics, nurses and medicines needed to stamp out TB. J&J’s own company credo says it bears its fair share of taxes and puts the needs and the well-being of the people it serves first. It’s time for J&J to uphold these commitments by paying its fair share of tax and charging an affordable price for its medicines.”

“Profits over lives is not acceptable. Developing a new drug and pricing it so high that most who need it cannot afford it violates basic human rights. As a coalition representing the global TB affected community we ask J&J to urgently make BDQ accessible and affordable and save lives.”

“The development and distribution of drugs to fight TB raise two questions: How much profit is enough? And, at what cost? What we know is that the cost of excessive pharmaceutical industry profits is unnecessary human suffering and death. We therefore call on Janssen to take a bold step and drop the price of bedaquiline now to no higher than $32 per month.”

“It is really unethical for a corporation like J&J to profiteer at the expense of people’s sufferings and people’s lives. Most of the people having tuberculosis are based in the countries that are struggling economically. We are worried that the high price of bedaquiline may limit the uptake of this crucial drug, and people will continue to be treated with older, painful, injectable containing regimen. We urge J&J to price bedaquiline fairly and within reach of the most vulnerable.”

“What good is a life-saving drug if the people who need it most can’t afford it? We finally have a few tools in our TB toolbox that can help beat back this epidemic, and everyone needs to move mountains to make sure we can save more lives with these tools today. Each day that J&J keeps this TB drug priced out of reach for the people who need it is a day that the world’s deadliest infectious disease is allowed to kill unfettered.”

Greece: All people in Moria camp must be evacuated to safety in wake of destructive fire