Since 25 August, more than 620,000 Rohingya refugees have fled from Myanmar into Bangladesh. Their arrival comes on top of hundreds of thousands more Rohingya who arrived in previous years and were already living in difficult conditions.

MSF has significantly scaled up its medical, water and sanitation efforts in support of the growing population. Many other entities, including the government of Bangladesh, have responded with food, shelter, health care and water. But the absence of roads into the huge densely populated camps means that aid is still not reaching many. Living conditions in the makeshift settlements remain extremely precarious and hazardous and are further putting people at risk. The situation must improve to avert a public health emergency. 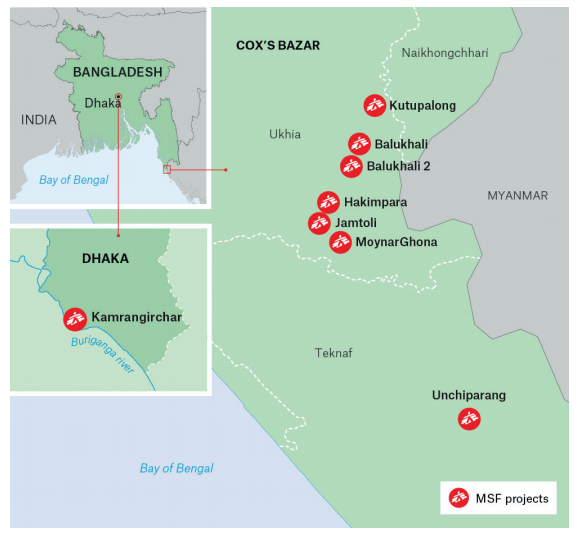 Over the same period, our teams have treated 88 women and girls who have survived sexual violence. Most of them were assaulted in Myanmar.

We are seeing significant numbers of children with complicated measles. In the second week of November alone, MSF departments admitted up to 20 severe patients per day. This is a sign of the poor access to routine vaccination and health in Myanmar, and poor living conditions in the camp. The Minister of Health in Bangladesh is preparing to implement a catch-up campaign.

Number of health facilities: Around 15 clinics and health posts, and two mobile clinics

Number of staff: 909 (national and international)

Number of patients: More than 67,169  patients have been treated at MSF facilities since 25 August

We are seeing many patients with respiratory tract infections and diarrhoeal diseases, and increasing numbers of cases of infant malnutrition. All these are directly related to poor living conditions in the settlements.

In October, we opened a second inpatient facility in Balukhali with a 50-bed capacity and a focus on mother and child health. We plan to open two more inpatient clinics in the region by the end of November and December.

In less than three months, we have set up 15 health posts and two mobile clinics to help address the primary health care needs of the growing population.

Since 25 August, we’ve treated 84 survivors of sexual violence at our sexual and reproductive health unit in Kutupalong.

Women are often reluctant to seek services. This is due to a number of factors, including the shame and stigma associated with sexual assault, a lack of awareness about the medical and psychological support available, and uncertainty about what will happen if they seek assistance.

In the early stages, after fleeing from violence and trauma, survivors are also more likely to be focused on basic survival needs, including finding shelter and food.

We have specialised staff on the ground to treat men, women and children who are referred for treatment as a result of trauma, including sexual assault and rape.

In the coming weeks, as people begin to process the trauma they experienced in Myanmar, and as some of these women and girls might be pregnant as a result of rape, we expect to see more survivors of sexual and gender-based violence seeking medical care.

To help ensure women, children and men can access medical care, including psychological treatment, our local community outreach workers are visiting the people living in the settlements in Cox’s Bazar to inform them about MSF’s free services, including treatment for sexual and gender-based violence.

Beyond the medical response, improving water and sanitation is a major part of our attempts to prevent the spread of disease. MSF has built more than 510 latrines, 105 boreholes and a gravity water supply system. We have also trucked an average of 55m3 of water to the settlements daily.

Between now and the end of December, we aim to install 400 boreholes and 1,000 latrines in the Balukhali and Kutupalong makeshift settlements.

MSF is supporting the government in expanding routine vaccination in the camps by initiating vaccinations for children and pregnant women at our facilities.

Our staff at all health facilities will have the capacity to administer immunisation for measles and rubella, oral polio and tetanus, according to national protocols. The number of suspected measles cases has increased in the camp over the past weeks. We’ve treated at least 566 suspected cases since mid-October and our inpatient departments admitted up to 20 severe cases daily in the second week of November.

The Ministry of Health began a 12-day measles mop-up campaign on 18 November. It aims to vaccinate 336,943 children between the ages of six months and 15 years. We are supporting this campaign with community mobilisation, site identification, logistics, and the transportation of vaccines.

Services at our clinic in Kutupalong, which opened in 2009,  include a 24-hour emergency room; an outpatient department; an inpatient department including a paediatric and neonatal ward; isolation beds; a diarrhoea treatment ward; sexual and reproductive healthcare services; a mental health department; and basic laboratory services.

We opened an outpatient department in Balukhali 2, formerly Mainnerghona, in October. Staff there are treating more than 270 patients per day.

Newly arrived refugees are being settled in the south zone, which is called the SS zone and also includes Balukhali I and Balukali II. We opened a health post in the SS zone on 18 November.

We opened an outpatient department in Tasnimarkhola/Thangkali (formerly Burma Para) on 26 October. The clinic treats around 300 patients per day and 30 per cent of them are children under five.

We are also building an inpatient clinic with a 50-bed capacity, which we plan to open on 21 November. It will focus on the treatment of acute-malnourished children and the management of measles. For the moment, measles cases requiring isolation are treated in a tented inpatient department with a 20 bed capacity. We have started drilling four deep production boreholes to provide water in the outpatient and inpatient departments.

The outpatient department we opened in Jamtoli makeshift settlement in September is now a primary healthcare centre. The clinic is sees up to 200 patients per day and offers a 24-hour primary healthcare service, a delivery room and examination beds. We are also running two health posts.

We have opened a health post in the Hakimpara makeshift settlement, with plans for the facility to have a 24-hour primary healthcare clinic. We run two other health posts.

The mobile clinic we started running in September in what was known as the Baggoha/Putibunia makeshift settlement and is now called Moynarghona, has been upgraded to an outpatient department. The clinic sees an average of 160 patients daily. We also plan to open an inpatient department with a 60-bed capacity before the end of the year. The inpatient department will offer an emergency room, paediatric and inpatient therapeutic feeding centre services.

Westarted a mobile clinic on 8 October, offering nutritional screening and basic primary health care and monitoring at the border point. The clinic’s services whose services have been integrated into the circuit of the reception centre.