Burkina Faso faced increased levels of violence in 2019, leading to an exponential growth of population displacement throughout the year. The number of internally displaced people has grown from an estimated 47,000 people in December 2018 to over 765,000 in February 2020, according to OCHA; more than four in five people are women or children under 15 years old.

Access to health services for people who have fled or are living in the regions affected by insecurity is seriously jeopardised. Doctors Without Borders/Médecins Sans Frontières (MSF) has launched several emergency projects to address the most urgent needs on the ground.

Forced to flee violence with nothing

“We are living with a host family and have nothing left,” says Amina*, who has been displaced.

Fortunately, health care is free here, otherwise I wouldn´t have come because I don’t have any money. Today we rely on the goodwill of others to survive.”

Amina visited the MSF team in Barsalogho, one of the first spots for displaced people, in Centre Nord region of the country, when violence started to spread in early 2019. She was living in a neighbouring village when armed men came and attacked the inhabitants in June 2019.

"We are living with a host family and have nothing left. Today we rely on the goodwill of others to survive."
- AMINA
DISPLACED PERSON IN BURKINA FASO

“Our yard was riddled with bullets, causing a lot of damage. We stayed holed up in the houses until the next day,” Amina says. “In the early morning, we took what we could and walked. One of my sisters-in-law was pregnant and almost full-term. She had to walk with us and it was hard to see.”

A few days after they arrived in Barsalogho, Amina and her husband tried to return home in order to get supplies, but armed men on the road ordered them to go back. They had no choice but to stay with a host family in Barsalogho, without any income to survive, fearing to move again.

From January to March 2019, MSF teams worked on an emergency intervention in Barsalogho and Foube in Centre Nord, northern Burkina Faso, where a large number of people had fled following violent clashes in Yirgou in the north of the country.

When the situation deteriorated again, the team returned in August and set up two advanced health centres to ensure access to basic health care and treat malaria cases. Up to 65,000 people are today displaced in Barsalogho (according to official figures available in February 2020). 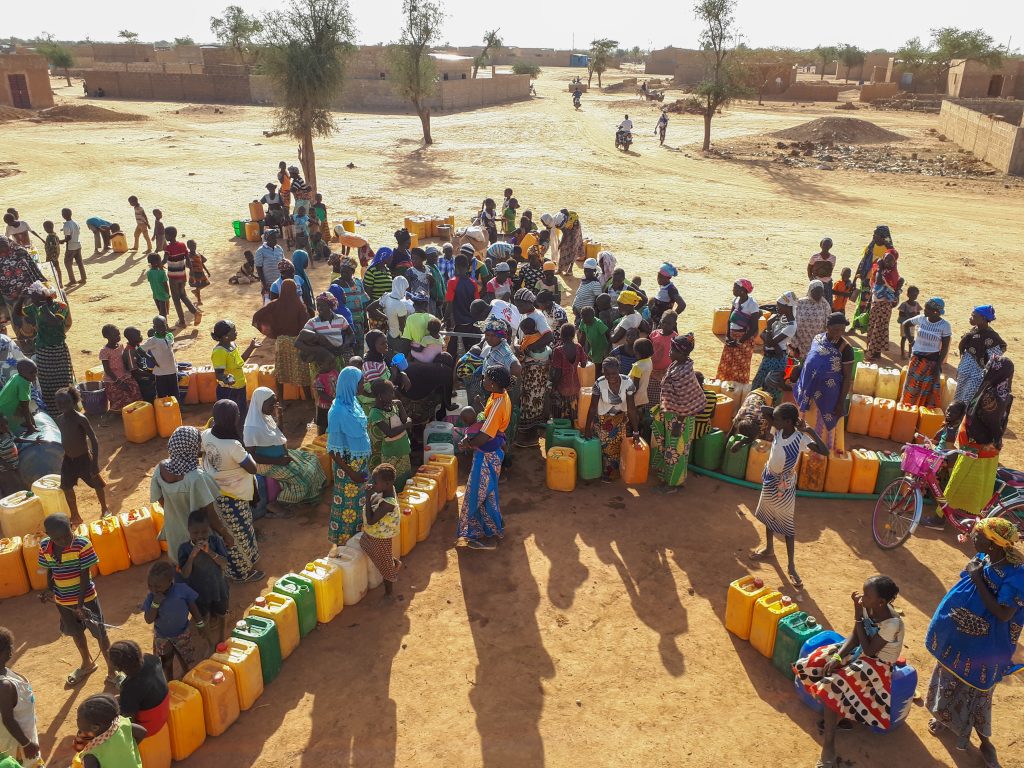 “The regular health system is completely disrupted today, which means, for example, that there is no advanced vaccination strategy that is done in the current context,” says Hassan Maiyaki, MSF´s head of mission in Burkina Faso. “Displacement increases the vulnerability of the people, and there is a heightened risk of epidemics.”

“When our teams arrive on the ground, they assess the medical needs, as well as any other needs that could have a direct impact on health,” Maiyaki says. “In Barsalogho, for example, people didn´t have sufficient access to clean water. That’s the reason why, for seven weeks, we provided the people of Barsalogho with up to 4,225 m3 of water per day, before another humanitarian organisation was able to take over this activity in September.”

MSF scaling up the volume of emergency interventions

MSF teams are still present in Barsalogho, but we have also scaled up emergency responses in other areas of the country. In the last few months, the humanitarian situation in Burkina Faso has deteriorated at blistering speed, with increased numbers of attacks on civilians. In late January, Human Rights Watch reported over 250 civilian deaths in 2019, from targeted attack and summary executions by armed groups.

In such a volatile context, most medical staff have fled and at least 100 health centres had to close, and a further 100 or more are now operating at minimum capacity. Insecurity has made it particularly hard for people living in remote areas to access health services in towns, as well as for humanitarian organisations to reach these people. Sahel and Centre-Nord regions are the areas with the largest number of internally displaced people.

Since November 2019, we have been working in Titao and Ouindigui in Loroum Province in the north of the country, areas that have seen a large influx of displaced communities (at least 21,000 people, mostly coming from Sahel and North regions). We provide medical consultations across all age groups and support paediatric and reproductive health activities at the urban health centre of Titao.

As the district hospital is no longer fully functioning in Titao, we set up an additional 20-bed unit to stabilise the most severe patients and organise referrals when needed to the nearest hospital, in Ouahigouya in the neighbouring Yatenga Province.  Malaria has been the main cause of death among our patients, half of whom have been displaced. We distribute water as well as basic hygiene and non-food kits, such as soap and cooking utensils, to the displaced communities.

In Djibo in the Sahel region, where MSF has had surgery activities since 2018, the teams also recently started trucking in water and set up two advanced health centres to facilitate access to healthcare to displaced people in the area, as the town now registers up to 131,000 displaced people.

The situation also deteriorated in the eastern region of the country. MSF started to provide assistance to displaced people in Matiacoali, Gayeri, Nagare and Fada Ngourma where we carried out medical consultations, distributed water and non-food items. As many communities have no access to water, we rehabilitated water pumps, dug boreholes and trucked in water.

Violence is quickly spiralling into the areas of Boucle du Mouhoun where we are providing support to local health staff in Tougan, Nouna and Solenzo.

With 2.2 million people estimated by OCHA to be potentially in need of assistance in 2020, the situation is critical. MSF is very concerned by the deteriorating humanitarian situation in Burkina Faso and the plight of people in vast areas currently cut off to humanitarian assistance.

*** MSF has been working in Burkina Faso since 1995. In 2018, the medical organisation started activities in the provinces of Soum and Oudalan, supporting emergency rooms at the Medical Center with Surgical Antenna (CMA) in Gorom Gorom and Djibo. In addition to the emergency room in Djibo, MSF also gives support in the operating room with a surgical team. In 2019, MSF had to scale up the level of activities in the overall country. As of today, our teams are present in Djibo, Gorom-Gorom, Titao, Ouindigui, Barsalogho, Fada Ngourma, Nagare, Matiacoali and Gayeri, to provide access to basic and secondary healthcare. In 2019, MSF teams provided more than 110.000 outpatients consultations in Burkina Faso and admitted close to 4.000 patients in emergency services.

Out of sight, people suffer from rise in violence in eastern Burkina...

Burkina Faso: Security and living conditions have deteriorated at ‘blistering speed’ for...

Kyrgyzstan: In remote parts, COVID-19 puts a strain on the health system