Democratic Republic of Congo (DRC) declared their tenth outbreak of Ebola in 40 years on 1 August 2018. The outbreak is centred in the northeast of the country. With the number of cases passing 2,500, it is now by far the country’s largest-ever Ebola outbreak. It is also the second-biggest Ebola epidemic ever recorded, behind the West Africa outbreak of 2014-2016.

During the first eight months of the epidemic, until March 2019, more than 1,000 cases of Ebola were reported in the affected region. However, between April and June 2019, this number has doubled, with a further 1,000 new cases reported in just these three months. Since early June, the number of new cases notified per week has remained high, averaging between 75 and 100 each week.

Latest figures – information as of 18 July 2019; figures provided by DRC Ministry of Health.

Contributing to this is the difficulty in identifying and following up contacts of people diagnosed with Ebola. Since the beginning of the epidemic, only around half of the new reported Ebola cases have been identified as contacts of previous confirmed cases before falling ill and seeking treatment, or dying without receiving proper treatment for Ebola.

On 11 June 2019, Uganda announced that three people had been positively diagnosed with Ebola, the first cross-border cases since the outbreak began.

On 14 July, the first case of Ebola was confirmed in Goma, the capital of North Kivu, and a city of one million people. The patient, who had travelled from Butembo to Goma, was admitted to the MSF-supported Ebola Treatment Centre in Goma. After confirmation of lab results, the Ministry of Health decided to transfer the patient to Butembo on 15 July, where the patient died the following day.

In reaction to the first case found in Goma, on 17 July 2019, the World Health Organization (WHO) announced that the current Ebola outbreak in DR Congo represents a public health emergency of international concern (PHEIC).

Given the ongoing challenges in responding to the outbreak, MSF believes that Ebola-related activities should be integrated into the existing healthcare system, in order to improve proximity of the services to the community and ensure that it remains functional during the outbreak.

Background of the epidemic

Retrospective investigations point to a possible start of the outbreak back in May 2018 – around the same time as the Equateur outbreak earlier in the year. There is no connection or link between the two outbreaks.

The delay in the alert and subsequent response can be attributed to several factors, including a breakdown of the surveillance system due to the security context (there are limitations on movement, and access is difficult), and a strike by the health workers of the area which began in May, due to non-payment of salaries.

A person died at home after presenting symptoms of haemorrhagic fever. Family members of that person developed the same symptoms and also died. A joint Ministry of Health/World Health Organization (WHO) investigation on site found six more suspect cases, of which four tested positive. This result led to the declaration of the outbreak.

The national laboratory (INRB) confirmed on 7 August that the current outbreak is of the Zaire Ebola virus, the most deadly strain and the same one that affected West Africa during the 2014-2016 outbreak. Zaire Ebola was also the virus found in the outbreak in Equateur province, in western DRC earlier in 2018, although a different strain than the one affecting the current outbreak.

First declared in Mangina, a small town of 40,000 people, the epicentre of the outbreak appeared to progressively move towards the south, first to the larger city of Beni, with approximately 400,000 people and the administrative centre of the region. As population movements are very common, the epidemic continued south to the bigger city of Butembo, a trading hub. Nearby Katwa became a new hotspot near the end of 2018 and cases had been found further south, in the Kanya area. Meanwhile, sporadic cases also appeared in the neighbouring Ituri province to the north.

Overall, the geographic spread of the epidemic appears to be unpredictable, with scattered small clusters potentially occurring anywhere in the region. This pattern, along with the lack of visibility on the epidemiological situation, is both extremely worrying and makes ending the outbreak even more challenging.

Located in northeastern DRC, North Kivu province is a densely-populated area with approximately 7 million people, of whom more than 1 million are in Goma, the capital, and about 800,000 in Butembo. Despite the rough topography and the bad roads in the region, the population is very mobile.

North Kivu shares a border with Uganda to the east (Beni and Butembo are approximately 100 kilometres from the border). This area sees a lot of trade, but also trafficking, including ‘illegal’ crossings. Some communities live on both sides of the border, meaning that it is quite common for people to cross the border to visit relatives or trade goods at the market on the other side.

The province is also well-known for being an area of conflict for over 25 years, with more than 100 armed groups estimated to be active. Criminal activity, such as kidnappings, are relatively common and skirmishes between armed groups occur regularly across the whole area.

Widespread violence has caused population displacement and made some areas in the region quite difficult to access. While most of the urban areas are relatively less exposed to the conflict, attacks and explosions have nonetheless taken place in Beni, an administrative centre of the region, sometimes imposing limitations on our ability to run our operations. 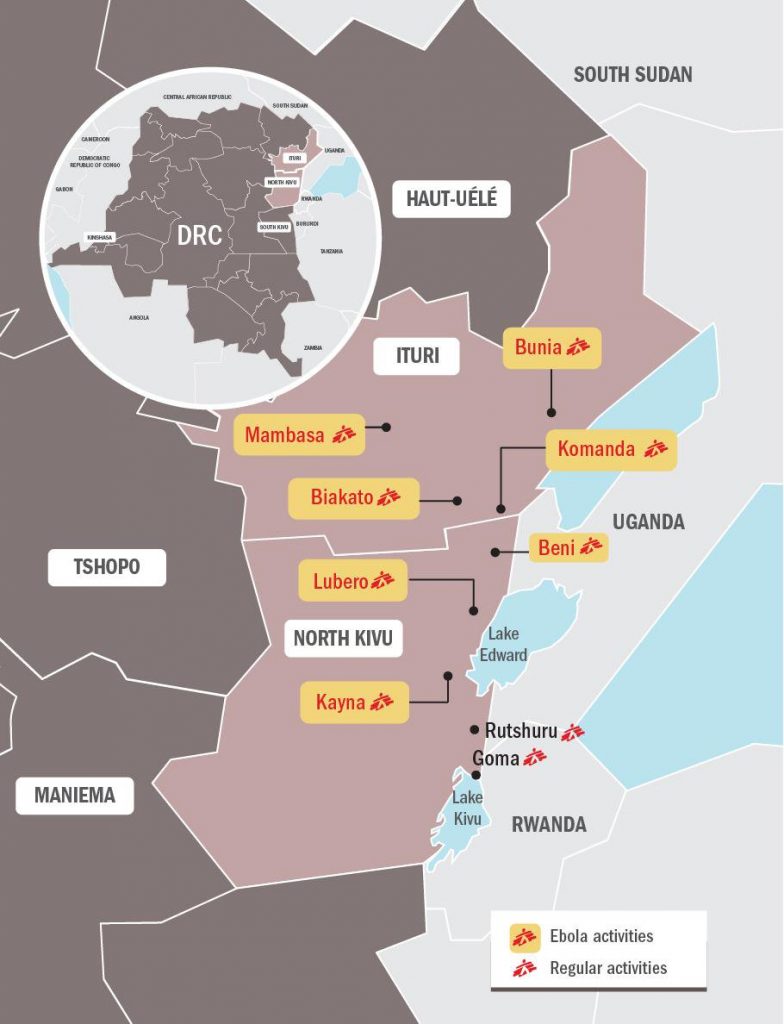 Existing MSF presence in the area

MSF has had projects in North Kivu since 2006. Today, we have regular projects along the Goma-Beni axe as follows:

As of early July, 25 out of a total of 47 health zones across Ituri and North Kivu provinces have reported cases of Ebola. Of these 25, 22 are considered active transmission zones, meaning that they have notified new confirmed cases in the last 21 days (the maximum incubation period for Ebola).

Two new health zones, Ariwara and Goma, were recently added to the list. While the number of new cases is decreasing in former hotspots such as Butembo, Katwa and Mandima health zones, there has been an increase in new cases in Beni, and a steadily high incidence of cases in Mabalako health zone. The first case of Ebola in Goma, a city of 1 million people, was reported on 14 July.

WHO has since subsequently declared the outbreak to be a Public Health Emergency of International Concern (PHEIC).

We have new tools and improvements in the medical management of this epidemic, compared to previous Ebola epidemics, such as new developmental treatments; a vaccine that has given indications of being effective; Ebola treatment centres are more open and accessible for the families of patients; and provision of a higher level of supportive care.

However, nearly a year into the outbreak, the situation in the Ebola-affected areas of DRC is deteriorating and the number of Ebola cases continues to increase: more than 2,500 cases and more than 1,700 confirmed deaths have been reported to date.

Many people continue to die in the community – either at home or in general healthcare facilities – and significant numbers of new confirmed cases cannot be traced to an existing contact with Ebola.

COMMUNITY MISTRUST AND ATTACKS ON RESPONDERS

The response has been marked by community mistrust towards the response; attacks on our Ebola Treatment Centres (ETCs) in Katwa and Butembo in February 2019 led us to withdraw from running these centres.

The mistrust and violent attacks against the Ebola response show no signs of abating; as recently as 13 July, two Ebola healthcare workers were killed by unidentified assailants, in Beni, North Kivu province, although the motives for the attack remain unclear. In late June, angry crowds hurled rocks at a driver working with an Ebola response team in Beni and set his vehicle on fire.

High levels of insecurity continue to hamper the efforts to control the epidemic and have a negative impact on its evolution: the violence further discourages people from seeking care in Ebola treatment centres, resulting in an increased likelihood of the virus spreading across the healthcare system.

The unrest, such as fighting between the army and armed groups in early May and the killings of a WHO doctor in April in Butembo, and a health worker in Vusahiro in late May, have brought many outbreak response activities to a standstill.

On 11 June, the Ugandan Ministry of Health and WHO confirmed three people from the same family had tested positive for Ebola in the Kasese district, western Uganda, which borders DRC. The family had travelled over the border into Uganda from DRC. They are the first cross-border cases in the current outbreak.

Two of the people sadly died, while the third person and two other members of the family, showing symptoms consistent with the disease, were repatriated to DRC.

The response to the current outbreak

The DRC Ministry of Health (MoH) is leading the outbreak response, with support from WHO.

We believe it will not be possible to end this outbreak if there is no trust built between the response and the affected people. Response authorities and workers must listen to the needs of communities, restore people’s choice when it comes to managing their health, and involve the community in every aspect of the Ebola response.

MSF believes that Ebola-related activities should be integrated into the existing health care system to improve the proximity of services to the community and ensure the system remains functional during the outbreak. This would help identify earlier on suspected cases and could encourage people to seek help more promptly at healthcare posts, clinics and hospitals that they know and trust.

MSF has been involved in the outbreak response, working with the Ministry of Health, since the declaration of the epidemic on 1 August 2018.

As of July 2019, we have more than 530 staff working in DRC responding to the Ebola outbreak.

We recently restarted providing care for confirmed Ebola patients in areas of active transmission – currently in Bunia, Ituri province – in collaboration with the ministry of Health. MSF is also finalising the construction of an Ebola Treatment Centre (ETC) in Goma.

In addition, our teams are reinforcing health promotion and community engagement in the areas where we are working. We are also working towards strengthening the disease surveillance system in our regular project areas, including in Goma

MSF is currently running the following activities in the affected North-Kivu and Ituri provinces:

Measles is a steady, silent killer among COVID-19

DRC: A deadly measles outbreak is spreading like wildfire