Noma in Nigeria: "The resilience of our patients is astounding"

Noma is an overlooked but dangerous disease that can leave often young patients disfigured. Hafiz, a surgeon from India, shares his experience of providing life-changing reconstructive surgery in Nigeria…

I had only a faint memory of the name of the disease I had heard during my medical schooling. Noma? Cancrum Oris?

I couldn’t quite remember…

Sometime in 2011, I attended a meeting organised by the Association of Plastic Surgeons near my hometown in India. There I heard a motivational presentation about MSF’s medical humanitarian work in various countries. Immediately after the meeting I approached the speaker and initiated the process to start working with MSF. 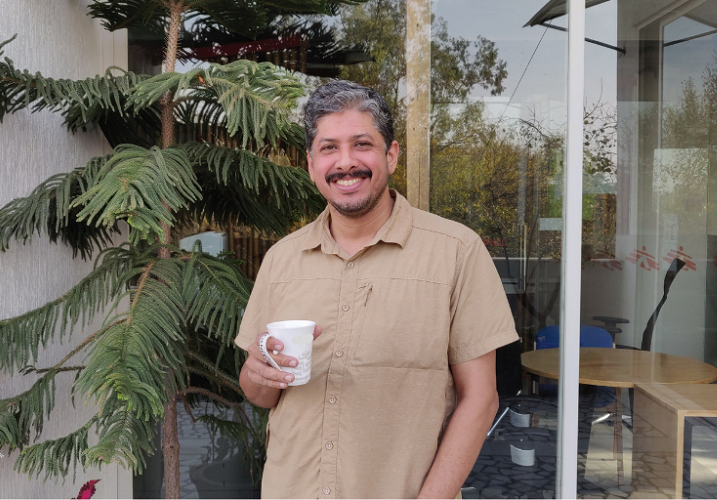 After several months of waiting and lots of paperwork, I was called for an interview in New Delhi and soon enough I was offered my first assignment.

My first assignment was to be Gaza in 2017, working as a reconstructive burns surgeon. However, it had been abruptly called off because of security concerns restricting our access.

Awareness of [noma] is very limited, and so are the treatment options.
As a plastic reconstructive surgeon, my options with MSF in my field of choice were limited. I preferred not to opt for general surgical assignments or war surgery, but to remain in my comfort zone, which is reconstructive surgery.

So, I was very excited when the MSF India office called me and shared with me the good news – I was “matched” for another assignment.

The assignment was as a plastic reconstructive surgeon for a project in northwest Nigeria treating patients with noma.

I had a lot of reading up to do on noma. It is a rather uncommon disease now, but still widely prevalent along the equatorial belt passing through in Nigeria, Chad, Cameroon and the Central African Republic.

However, awareness of the disease is very limited, and so are the treatment options.

The disease destroys the bone and tissue affecting the jaw, lips, cheeks, nose or eyes. This rapidly spreading orofacial gangrene is primarily a result of malnutrition and opportunistic oral infections in children suffering from an already weakened immune system.

The mortality rate for the disease is also high, and many patients require reconstructive surgery.

This is where MSF decided to intervene. And, for the past five years, we have been supporting the noma children’s hospital, in the city of Sokoto, where we are working alongside the Ministry of Health.

Learning to treat the disease

Detailed literature regarding this disease is also fairly limited – a small textbook by the Dutch Noma Foundation shared with me by a previous surgeon became my bible for understanding the disease.

The book contained multiple pictures and accounts of facial deformities caused by the disease which immensely helped me later, saving me from the shock of the unknown during the assignment.

The international team also had extensive experience in treating noma, which made me nervous at first since this was my first time treating the disease. However, constant encouragement and sound advice from the staff helped me focus on my work.

As days passed by, my apprehensions died down as I realised that I could depend on my fundamental skills as a reconstructive surgeon at most times.

The camaraderie among the staff also ensured things went smoothly.

I believe my time spent in the assignment was worthwhile. We treated over 27 patients and the large majority of them showed fair to excellent healing.

Every surgeon knows that post-operative care is vitally important, if not more so than the surgery itself. The ward rounds were therefore very important and something I always looked forward to. This is also when one gets to see the human body perform its job of natural healing after surgery.

More than anything else, what really astounded me was the resilience of our patients.

Even with the disease, many would be up and about, smiling in the evening after their surgery, often making us wonder if it was the same patient who we had operated on that morning.

Rarely would anyone complain of pain, which was remarkable and in stark contrast to the healthy and fit patients I regularly encounter in my daily practice back home.

My two-week assignment flew past in the blink of an eye.

In a memorable thank you ceremony, the relatives of many of our patients got together in the hospital courtyard on my last day and shared their gratitude through a traditional dance performance.

It was a delightful evening and the energy of the performers compelled even the shy and awful dancer in me to join the fun.

I hope to return soon!

“Everybody here is working beyond their limits”: Inside the COVID-19 response in Italy